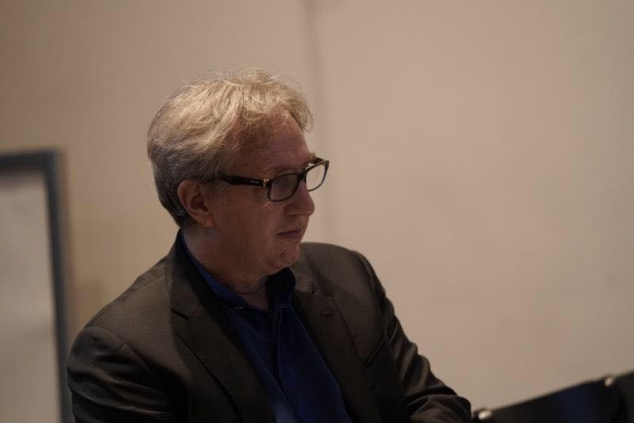 Faculty member Rick Baitz’s most recent works have been immortalized by Innova Recordings and released on the new album Into Light. The three pieces presented span various stages of his career. Together, they represent a return to concert music for the seasoned media composer.

Baitz’s work tends to explore musical movement in time. He speaks at length about the ways that music can show that movement, and the way it transports the listener. Given his background, he’s especially interested in non-Western ways of approaching that motion. He spent part of his youth in Rio de Janeiro, Brazil and Durban, South Africa, among others. His wide variety of experiences instilled in him a unique sense of how to approach musical construction. His singular perspective shows in the way he deliberately eschews harmonic motion at times in favor of texture, rhythm, and musical gesture. These latest works represent some of his most comprehensive takes on his longstanding fascinations.

“Chthonic Dances” is a string quartet composed in 2011 for Mary Rowell, and revised in 2016. It features Joyce Hammann and Mary Rowell on violin, Beth Meyers on viola, and Ashley Bathgate on cello. The piece exalts his experience with the healing, cathartic power of dance across cultures around the planet. It veers between shimmering textures and bright, folksy dances. “The healing energy of dance is a constant wherever I’ve lived,” says Baitz. “From South African township music to Brazilian samba, the juxtaposition of dance and story-telling creates catharsis- and if you’re down, the act of dancing your pain is a force in transcending it. So the dance of chthonic spirits brings out their complement, the spirits of light.”

“Hall of Mirrors” was a commission for the Juilliard School’s “Beyond the Machine” concert series, and premiered in 2015. This recording features percussionists Brian Shank, Christrian Lundqvist, Jeremy Smith, and Brian Shankar Adler. Baitz himself accompanies on electronics via a laptop computer. The piece features percussion from around the world, including mbira, caxixi, talking drum, surdo, dumbek, and tabla, to spin a unique web of weaving, interlocking rhythms.

“Into Light” is a new recording of an earlier work, from before Baitz’s film scoring years. Baitz calls it both a dance and a meditation. It features Ken Thomson on clarinet, Jessica Meyer on viola, and Stephen Gosling on piano.

Rick has a long history of bringing phenomenal New York session musicians to the VCFA program. During his tenure as faculty chair in the early years of the Music Composition MFA, establishing strong relationships with virtuosic talent was one of his most enduring achievements. In turn, he has collaborated with several people that he has met through the school. Baitz’s collaborative projects are a perfect example of VCFA’s spirit of cooperation and artistic spark.

A concert and release party on Thursday, September 13th celebrated the album. Tribeca New Music hosted the concert, which was a virtuosic showcase for the composer and the performers alike.

You can find Into Light at Amazon on CD or digitally. You can also find it at Apple Music or iTunes. If you’re feeling more direct, you can always grab it straight from Innova.

This year has been an exciting one for Baitz. In May, BMI awarded him their Classic Contribution Award. The commendation recognized his creation and 10-year leadership of BMI’s “Composing for the Screen” workshop. Previous honorees have included the likes of Mike Post and David Newman.Authentic Nike Sneakers | Sneakers Nike Shoes