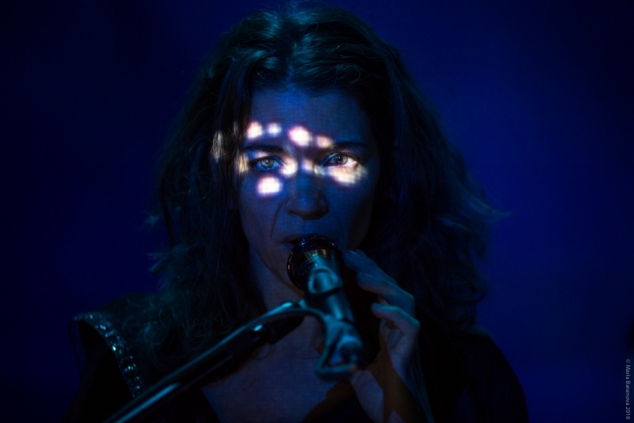 Carla Kihlstedt is a composer, musician, and faculty member at VCFA’s own MFA in Music Composition program. She’s making waves with her newest multimedia song cycle, Black Inscription, a collaboration with her drummer/composer husband, Matthias Bossi, and multi-instrumentalist/composer Jeremy Flower. Written with the guidance of marine biologists from the Woods Hole Oceanographic Institution, the 15-track song cycle imagines the final dive of the real-life record-breaking free diver, Natalia Molchanova, who took an unannounced recreational dive into the ocean in 2015 and completely disappeared. The epic piece also draws inspiration from the ocean generally and raises awareness of the changes it faces due to pollution, global warming, and overfishing.

The cycle is a mix of rock and classical genres with some overlaid spoken voice. It’s performed by Carla and Matthias as the band Rabbit Rabbit Radio, with the inclusion of a seven-piece band, sound design, and visual oceanic imagery.

Black Inscription will release on World Oceans Day (June 8) and 50 percent of the proceeds from the digital sales on that day will be given to oceanographic research and conservation.

Carla Kihlstedt was kind enough to chat with me over email about Black Inscription’s conception and evolution, the life and influence of the song’s star protagonist, and Kihlstedt’s own hopes for her song cycle’s impact on the ocean.

Where did the idea for your newest project, Black Inscription, come from?

The winds of inspiration for Black Inscription blew in from several different directions. They twisted together and made a braid that had that sense of inevitability and promise that seems to exist at the beginning of every creative endeavor in any field—science, art, performance, writing, etc.

We live in Woods Hole on Cape Cod. It’s not only surrounded by water, but has an inordinately large community of both ocean scientists and independent radio producers. In other words, people who study all aspects of the ocean, and who are all extraordinary storytellers. These are the parents of our kids’ friends, the people we are building community with, the people we see on a daily basis. This was one of the pieces of the braid.

Because Rabbit Rabbit Radio is essentially a duo, we like to invite friends in various ports when we tour to join us on stage. Two of those people in L.A. are George Ban-Weiss (bass) and Michael Abraham (guitar). George is also an environmental engineer on the faculty of USC. When he suggested that we apply for a humanities grant that USC has, and write an ocean-based environmentally inspired piece, it was as if he’d outlined a shape that was sitting right in front of us.

This project felt inevitable, and so incredibly relevant to our lives here on Cape Cod. It also helped me begin to scratch a bigger itch of searching for ways to have my creative life connect to the bigger picture of my life as a citizen of the planet.

The ocean is so vast! How do you even begin to write a song cycle about it?

I started by casting the net as wide as I could, looking for specific bits of stories, ideas, issues… things that connected to who I am as a poet. I watched every TED talk I could find, and told everyone I knew what I was doing, casting about for a good entry point. I kept a running list of ideas that came back to me. 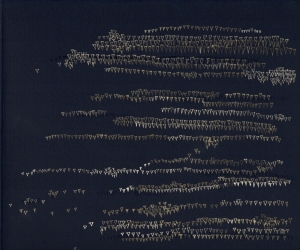 Then, my mother sent me an article about Natalia Molchanova’s disappearance, which set the piece up to follow the form of an Odyssean journey of sorts (e.g. a character embarks on a journey, encounters all kinds of things, reaches a point of no return, and finally emerges, altered in a profound way.)

In the first two songs of the cycle, we follow Molchanova’s initial descent, seeing the underwater world as the light from the sun gets more and more remote. From there, she begins to encounter specific things in the ocean. Things that belong and things that don’t: bioluminescent creatures, trash, coral reefs, an octopus, fast-moving currents, noise pollution, etc. All of these things I learned about by reading everything and asking everyone I possibly could. We were lucky enough to have two advisors to the project who are marine biologists at the Woods Hole Oceanographic Institution. They have both spent a lot of time at sea both monitoring unmanned submersibles and descending to the depths in ALVIN, a manned submersible. They were kind enough to let me look over their shoulders in the lab, and to send me things that might spark my interest, for example, a list of marine debris they were cataloging from a dive to the canyons off the coast of Massachusetts, which sparked the song “The Ghost King.”

What was it that drew you to Molchanova as a character?

Molchanova was arguably the world’s best freediver. Freediving is the practice of training your body to dive deep into the water without any oxygen tanks or other breathing apparatus. You simply fill your lungs and go. It is both the length of the breath and the pressure of the depths that make it a self-selecting and unbelievably challenging sport. However, her influence went far beyond freedivers and athletes, because she was able to speak and write beautifully about what freediving meant to her spiritually and philosophically.

How did using the poetry of Natalia Molchanova alter the piece, its course, its trajectory, its sound?

Even though her words only figure directly in the first two songs, the piece as a whole wouldn’t exist without her poetry. When I read her poems, I could put myself in her place. I could imagine, even though I’m not a diver myself, how she felt.

We’ll post Part 2 of the interview next week. Stay tuned!

Diving Into Everything Part 2: An Interview with Carla Kihlstedt
Scroll to top