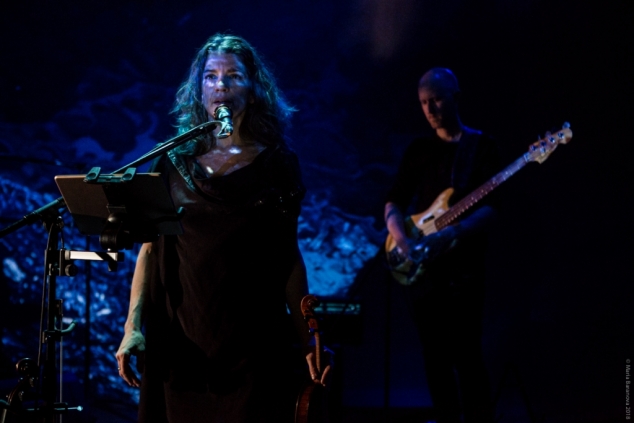 Where did the title Black Inscription come from?

I credit two people for the inspiration of Black Inscription: Natalia Molchanova and Rachel Carson. Rachel Carson made her mark much like Natalia, by not only being a profound observer of the natural world and humans’ impact on it, but by having the ability to put those multifaceted observations into words so moving and accessible to all. It was both of these women ability to communicate that solidified their influence on their communities and on our culture at large.

When I read the term ‘black inscription’ in Carson’s description of the universal line of microplants that lives everywhere the sea touches the rocky shoreline, it clicked. It felt like an invitation to all of us. An invitation to do some work, to decipher, to investigate the clues we get from the ocean. Great scientific discoveries have been made by studying the smallest traces and evidences of the processes of the natural world. You don’t have to see the whole picture in order to begin to understand. No one will ever see the whole picture. But the better we get at sharing our clues, the more of it we’ll understand.

I’m much more aware now, after having created this piece, of the symbiotic relationship that the expressive arts and the sciences have. Scientists get deeply into their studies because they are moved and fascinated by something they observe. That is the same part of the brain that activates when we are moved and engaged by a compelling piece of art. It’s all storytelling…. not to imply at all that it is shallow or fictional, but that the storytelling parts of our brain are where we engage our sense of wonder, awe, excitement and pathos. Often scientific discovery is conveyed as a series of dry facts, because the process of analyzing observed facts is critical for deep scientific understanding and verification. But translating those observations back into something the story-telling parts of our brains can indulge in is critical for motivating people to be curious enough to learn more and ideally, to take responsibility for their own actions. Science and art need each other. They are two sides of a coin.

How has the piece changed throughout the course of making it?

For the first 18 months, I didn’t know how to introduce the audience to their protagonist. I tried all kinds of things in my mind. None of them were satisfactory. Essentially, she dies in the first scene of the play… there’s an unspoken rule in theater that you’re definitely not supposed to do that. Especially if you want people to follow her in her implied afterlife. I built a fence around this empty space at the beginning and waited for the answer to fall from the sky. And one day it did. A radio producer friend sent me a link to a beautifully written and produced radio piece on BBC Radio called Jump Blue.

It is a 20-minute piece that imagines Natalia Molchanova’s final dive from her perspective. It is extraordinary. Fiona Shaw is the voice of Molchanova. And it quite literally ends where our first song begins. I reached out to the author, Hannah Silva. She not only agreed to edit a version of her text specifically to fit as an intro to Black Inscription; she’d also write a new text that would reconnect with us near the end of the piece. Her words bring such depth to the piece, both as a live experience, and on the album. I am so grateful for that twist of fate and serendipity. I will forever believe in the power of patience!

I read an article that stated that Black Inscription “turns Molchanova into an immortal creature who is able to guide the audience through the depths, past the point of safety, and through a world that has never before been experienced. ” Can you discuss the importance of immortalizing the life of deep-diver Natalia Molchanova? Of immortalizing people through art, in general?

Molchanova spoke of wishing she could simply stay in the depths. She felt such clarity, calm, and focus when she dove, and had conflicting emotions at the point at which she knew she had to return to the surface. When I discovered her poems on her website- http://molchanova.ru/en/verses – it was the first time I felt like I had a point of view to work with. Here’s a character through whose eyes we could explore the ocean. There also seemed to be some poetic justice in imagining that she was simply able to keep swimming as she had always fantasized about. My intention is not to take away from the obvious tragedy of losing her. She meant so much to so many people, both family and fans. Now that her diving records are being broken, as is the way with records, it feels even more important to help continue the message of her legacy.

Stories are the way we remember who we are. They are all that’s left of our lives once we are finished living them. In a way, mythologizing someone is the act of celebrating them by making them larger-than-life. It is the act of taking the bit of magic that existed at the core of their lives, their passions and their choices, and turning it into a prism… projecting it on the wall expanded and magnified. It is not that her earthly deeds, words and records were not enough in their own right. We’re connecting to her deepest intention—and therefore to our own deepest intentions—when we indulge in a bit of mythologizing. Anyone who has ever read a fairy tale to a child or made up a bedtime story knows the power of connecting our experience and our imaginations.

If you could bring Natalia back up from the deep, what question(s) would you want to ask her?

Writing the songs was my way of asking her. And in her own way, she answered.

You mentioned in the Art More Than Ever podcast that Natalia’s “sense of vanity dissolved during her dives” and “returning to the surface was always a bit of a disappointment” to her. I definitely feel this way when I find myself in almost maddening fits of writing, where words are flowing out of me and I lose a sense of time. Do you see diving and art-making as having overlapping qualities? If so, how?

Even though she was writing about diving, her words connected deeply with me across disciplines. That’s the magic of poetry. A poem is like an outline, like a constellation. It is an outline of a shape, and with a great poem, the reader can fill it with pictures from her own experiences.

Natalia’s poems are not just about diving. They are about the search for self, for the dissolving of ego, for belonging, for freedom, for connection. They are about both losing and finding one’s self, as we do when we go deeply into anything. I think that’s why this piece works, because it is an odyssey about diving into the ocean, but also about diving into everything & anything. She is Natalia, but she is also everyman/everywoman. Her point of view is specific, but her message is universal. For me, the creation of the piece was about having the courage to reconnect with my life as a creative artist in the wake of becoming a mother (I have two kids, ages 8 and 4). Ideally, everyone will have their own version of what it is about for them.

Have you noticed any changes in yourself from tackling this project?

Yes! It has significantly made my work a much more holistic part of my life. I no longer think about writing songs and music as something separate from how I walk through the world. Now, when I walk on the beach, or anywhere really, it’s like I’m collecting colors, ideas, rhythms, words… Do you know that kids’ book by Leo Leonni called Frederick the Mouse? That was always one of my favorites. And now it’s like I’ve stepped into my role as Frederick in a more conscious way.

Your lyrics and music will be presented visually in Black Inscription performances, correct? Why did you choose this multimedia format? Do you see all of your music as having visual representations?

Visual art is never very far away from my process. I’ve always included it, either as part of my own process, or as a part of the final product. It’s just the way I’m wired. The more connections I can make between mediums, the stronger the weave of my work feels to me. In this case, as we were working, I kept on thinking about my friend Lisa Carroll, a visual artist whom I’ve known for years. She is a very intuitive artist and is deeply connected to the natural world.

Something kept her name in my head as we wrote these songs. So finally, I called her up and asked her if she was willing to do some artwork to accompany the piece. She said that she had just been getting deep into working with water imagery, and had begun to do meditations by water that she would then translate into drawings. (Again, that great feeling that something bigger than any of us was at work!) We decided that she’d do a drawing for each song. I sent her my lyrics, the songs, and my rambling thoughts and inspirations. She took them and ran in her own direction. What she came back with was simply stunning.

I think I can speak for us all that we can’t wait to see the finished product. How and when will we be able to access Black Inscription?

There are several ways we are selling the album, ranging from digital track downloads to CDs and LPs (available on rabbitrabbitradio.com) to what I call the “pretty silver envelopes,” which will contain liner notes, artists notes, lyrics for each song, a CD, a download code for the digital tracks, and a hand-pulled screen print of each of Lisa Carroll’s drawings re-created by Jay LaCouture at AntiDesigns in Boston.

Thank you so much for chatting with me, Carla! I just have to ask: do you have any advice for budding artists/performers?

Be careful of what you tell yourself. You can do more damage to your own sense of possibility, of who you are and what you are capable of than anyone else on the planet possibly can.

Give yourself some time in the sandbox, time when it’s ok to not have the answer, but you can play with all kinds of answers. Not having the answer is a beautiful feeling. Get comfortable with it!

Hold on tightly, but let go lightly. Be willing to sacrifice everything for your vision, and then drop it all if a better way emerges. (You are made of ideas…they are not scarce. You’ll know the ones worth ditching it all for!)

For performers, you are a surrogate, a conduit, a stand-in for the audience, a docent for their experience. They look to you to know how to feel, where to put their attention. That’s a big job. Enjoy it!Sports News | nike air force 1 shadow , eBay