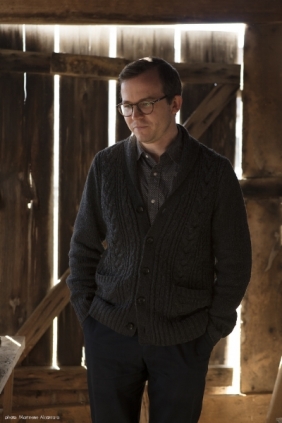 Aaron Wyanski, who graduated from the MFA in Music Composition program in 2015, recently returned to campus – this time in a slightly more unique capacity. Living in the VCFA dorms, he created his own six-month low-residency program for one. The time and space provided to him by VCFA enabled him to work on one of his most experimental and out-of-the-box compositions yet.

After receiving his master’s degree, Wyanski moved to Hartford in order to pursue his Doctorate in Musical Arts (DMA) at the Hartt School of the University of Hartford. Now that his coursework is complete, he is working on his dissertation piece: “a semi-dramatic work for two sopranos and chamber ensemble, set to an original text culled from the first twelve Sherlock Holmes short stories.” Through a very particular set of circumstances, Wyanski ended up back in Montpelier to make headway on the project.

Working with Jonathan Bailey Holland, John Mallia, and Roger Zahab during his time at VCFA, Wyanski confesses: “I was somewhat unusual. I was relatively new to composition at that time.” A piano player himself, Wyanski’s background was in jazz and improvised music. “Maybe a year before [my MFA], I had started writing my first little dinky pieces. When I was having problems with pain in my arms while playing (which eventually went away!), I couldn’t practice at all. But I could write music.” As he became more interested and confident with composition, Wyanski searched for a degree program in which he could build a body of work, network with professionals in the field, and absorb everything he could about the art of composition. “Quickly, it was obvious that this was what I should I do.”

Wyanski’s Soundcloud account showcases a large scope of his work, with about half of the pieces composed during his MFA program. His pieces range from chamber quartets to vocal ensembles to electronic ditties. However, there is a familiar soundscape present in all of his work. “There’s this thing that I do, which feels hyper specific, and I just try to trust that more and more. Some days, I think, ‘I’d like to write a piece that was fast or loud.’ There are these certain affects that aren’t as natural to me.” He describes melody as something that happens to him, as opposed to it as a starting place in his pieces. “For me, it’s so much more about gestures, the inertia of those gestures, and the accumulation of these little microgravities.”

This “Wyanski-ness” which permeates his pieces is the musical equivalent of an inherent feeling of unease. That sudden smothering of tension is a thread needling throughout all of Wyanski’s works. For example, in his piece, “Everything’s Fine and Nothing’s Ever Been Wrong” (performed by The Amaranth Quartet), the musicians crunch their bows on their strings, imitating the creaking of a door. The suspense builds. The audience waits, knowing there’s something behind that door. The musicians collectively breathe, then slip to silence, and so on. Wyanski describes this state of tension as “the uncomfortable threshold between past and future that is the present moment.”

Which brings us to Wyanski’s present project: his doctoral thesis, “And Yet You Have Seen.” The project was sparked by the simple thought: “It might be cool to do something with the text from Sherlock Holmes.” Written for flute, bass clarinet, vibraphone, piano, two soprano voices, and strings, the composition (when completed) will attempt to create a “surreal, dreamlike version  of the formulaic trope employed by Doyle’s prose,” while exploring themes of alienation and connection.

Using a carefully orchestrated system of dividing each of Arthur Conan Doyle’s twelve short stories into twelve equal parts, Wyanski systematically chose sentences from each story to include in the patchwork dialogue accompanying the music. He was careful to deliberately omit any names from the text. “Two speakers are clearly not Holmes and Watson,” he states.

Wyanski marks Max Ernst’s collage novel, Le Semaine de Bonte, as a major influence for his project. “When you look at those Ernst pieces, they are so clearly of that Victorian era,” he says. At the same time, Ernst takes that zeitgeist culture and pushes it into another realm, a subverted Victorian world. Aaron goes on, “When you look at the novel, you’re not thinking, ‘What are these two Victorian people doing?’ It has its own dream and logic.”

When asked why he chose to write a nuanced version of Doyle’s beloved detective, Wyanski smiles,“Because I love it! [The world of Sherlock Holmes] is this closed universe that I wanted to spend more time in. It’s super hermetic. Each story in the Sherlock Holmes canon are these little trapped cycles.” His dissertation advisor, Ken Steen, describes the piece as “a diorama,” comparing the intimacy between Wyanski’s two leading characters with the closeness of two people in a little cardboard box.

Wyanski is now back in Hartford to complete the final touches on his Holmesian endeavor. However, he credits VCFA as a major factor in the production of the piece: “I wouldn’t have been able to work on this without the space this school has provided for me. VCFA is magical.”

Keep your eyes and ears out for the work of Aaron Wyanski: a talented composer with a uniquely ethereal style, a creative risk-taker, an explorer of thresholds. In his newest piece, “And Yet You Have Seen,” he doesn’t present us a mystery to solve. He provides us the opportunity to step inside a dream.

Cameron Finch is a first-year MFA in Writing & Publishing candidate at Vermont College of Fine Arts. She is the managing editor of Hunger Mountain: The VCFA Journal of the Arts and an intern for the VCFA Publications/Marketing Dept. In addition to writing creatively, she also freelances for Michigan Quarterly Review and Buzzworthy Media. Learn more about her at ccfinch.com.Sports News | Best Selling Running Shoes