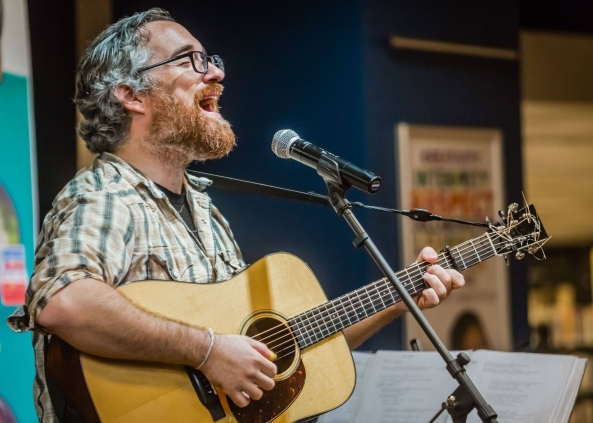 Scott Barkan came to VCFA for the stability a master’s degree could offer, but he found a musical journey that helped him rediscover his passion for composition. His degree helped him land a university position that allows him time to compose, and gave him a rekindled flame for the music that he loves most.

Scott Barkan had always made a living playing guitar. He taught the occasional private lesson, but the bulk of his work came from touring and recording. He was a sought-after session player, and toured with the likes of Marian Call and Howard Fishman. For 20 years, it was enough. But a few years ago he’d started wondering what was next. “Assuming I don’t ever have a big break, and reach a point where I can expect to indefinitely sustain myself just playing guitar and writing songs, what else could I do? The only thing that really added up to me was teaching on a college level.”

But that meant pursuing a master’s degree. And Scott’s schedule kept him touring constantly. “I was also hoping to find a program in songwriting. And at the time there was only one, maybe two in the world, and they were both overseas. I did entertain it, and I did reach out to those schools, but ultimately I couldn’t do that.”

When he found VCFA, he was excited, but hesitant. “It seemed at the very least like the essence of what I was trying to find. I was very concerned about the legitimacy of the program, to be perfectly honest. But I gradually transitioned from highly skeptical to super excited about it during the first week, and it wound up being a great experience. It wound up being what I was hoping for it to be. I was able to get the degree without abandoning my current career, and I had an excuse, I had permission to dive deep into things I’d wanted to dive into. I couldn’t budget time for it earlier, but getting the degree meant ‘Well, I have to do this now.’ And that was great for me.”

His initial plan was simply to get credentialed to teach and get out, but he wound up finding more than just credentials. “I was prepared to go through the motions, in a way. But I wound up being very inspired by the process. I became excited about the creative potential as it went on.”

Over time, Scott had drifted from avant-garde, jazz-inspired work to more mainline pop songwriting. He’d long wanted to marry the two styles, but he hadn’t figured out how to do so. And he hadn’t really had time to devote to figuring it out. VCFA gave him that time. He started expanding once again from his pop style into something fuller. He moved from writing on his guitar to writing sheet music again, and found joy in the expansion of possibility that happens when you’re not just thinking about what’s easy to play on the instrument you’re writing for. He also learned a lot from his mentors. John Early and Don DiNicola helped him on the songwriting front, but he was most surprised by John Mallia, who challenged him often.

“I also feel that my work with John Mallia was pretty formative and instrumental for me. His area of expertise is incredibly broad. But the stuff he’s deeply into, that I knew nothing about as far as modern compositional ideas, really put my head in a different place than it ever has been. And his feedback was so far from my own thoughts about things. Just the way he phrases things, and looks at things, is so different from the way that pop music is structured that it helped me get my head out of that space.”

All of that culminated in a bold, multi-movement thesis piece with some pretty unorthodox instrumentation. “I think it’s my favorite thing I’ve ever written. But it’s extremely niche. That’s a piece that’s so tailored to my individual taste that I’m constantly surprised that anyone wants to listen to it. But for what I want to be doing, I love it.”

Scott’s latest record, Good at Goodbye, scratches the surface of that avant-garde streak as well, albeit in very subtle ways. “I think it’s present in a good portion of the new record…I think it still errs on the side of songs, but there’s certainly evidence of it in there. People have responded to it in that way, though, maybe more than I was thinking. I think I’m immune to what’s on there now since I’ve spent so much time with it. But most of the feedback I’ve gotten has been that it’s a more adventurous electric guitar record. Which is what I wanted. But I still think that there’s a long way to go between that and the thesis.

But most of those songs were written early in his time at VCFA, and he promises that he’s going to keep pushing boundaries—especially once he gets his feet under him at his new gig. Scott landed a teaching position at Rowan University almost immediately.

“It’s great. I feel like I’m amazingly lucky to have gotten this gig so fast. Certainly if I hadn’t gotten the degree, I wouldn’t have gotten the job. I got the gig within a week after graduating. Within a week, I was hired. Subsequently in my second year, I’ve been hired by two additional schools in the Philadelphia area. So obviously that would have been impossible.”

As it turns out, the program had some unique needs, and thanks to his VCFA experience, Scott was uniquely equipped to fulfill those needs. “A big part of it was that I was able to say that I specifically had a degree in songwriting. The director of the program that hired me basically said, ‘I didn’t know that was even a thing it was possible to have.’ So on the one hand, I was incredibly lucky to be in the right place at the right time, but on the other hand, if I had gotten the degree from another school that didn’t have that focus, it would’ve sent a different message to the department that was looking for a songwriter.”

The university has him teaching classes in songwriting, as well as courses on the business aspects of the music industry. But they also support his work in much the same way you’d expect a university to support a researcher. He’s still getting his feet under him, but he’s excited for the future. “At this point I wouldn’t say it has enabled much beyond stability, as far as musical output. But I think that is inevitably part of the future, and the reason to do this. This job was forgiving enough that I could go on tour for most of October (with Marian Call) and that not be an issue.”

“So once I get the learning curve out of the way, I see it as the perfect gig to support the other work that I want to be doing creatively. Which does take the pressure off of having to take any old gig. I hope to able be to put the energy I spent into just surviving into a meaningful, thoughtful creative process.”

Scott’s music is heart wrenching, emotionally honest, and bold. The emotional gut-punch that he achieved with his thesis piece was staggering. Scott is now armed with his renewed passion for bringing the weird back into everyday life in a palatable way. And he’s working a job that offers him the perfect combination of stability and freedom. Good at Goodbye is just the beginning, and we can’t wait for what’s next.