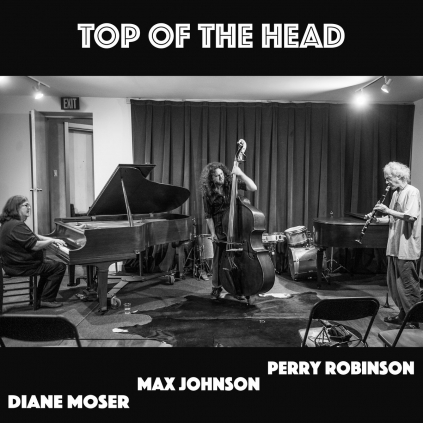 The album is called Top of the Head, and as the name suggests, it’s improvisatory—or, as the album’s Bandcamp page puts it, “spontaneously composed.” That’s actually a fantastic way to describe what’s happening on the album. All three musicians are jazz and improvisatory players, with deep wells of experience. Listening to the interplay between them is a joy. Moods shift and turn on a dime, and all three players are keyed in to the same emotional wavelength. The emotional intelligence and deep listening that improvisation requires is a skill, and Robinson, Johnson, and Moser have deep reserves of that skill. Hearing them respond to one another’s subtle changes in direction is a treat.

And it’s a treat for a good cause! Top of the Head has been released via Minus Zero, a musicians’ collective devoted to human rights and social justice. Planned Parenthood will receive 100 percent of the money that Minus Zero makes. The album was recorded in January 2014, but has just recently seen release. It came out on January 19, just in time for the anniversary of the Women’s March (and the second wave of marches).

Max Johnson is an adventurous composer and performer from New York City. In addition to composing and recording pieces with astonishing prolificacy (this is his third album release since July 2017), he’s also a sought-after session and touring bassist. You can catch him performing with the Jeff Austin Band across the country, as well as with his own duo, Jolliff & Johnson. He also performs with various ensembles and bluegrass jams across New York. He’s played with everyone from John Zorn to Andrew W.K.

Diane Moser is a bold jazz/improvisatory pianist and composer out of the New York area. Her Composers Big Band is a 17-piece ensemble that has been presenting monthly concerts since 1997. The ensemble is dedicated to developing and presenting new work. She also has a quintet and a trio. She’s performed with everyone from The Drifters to the Cedar Rapids Symphony Orchestra, Marty Ehrlich, Bill Zabatsky, and more.

Perry Robinson is a noted clarinetist, saxophonist, and composer. He grew up around music and musicians because of his father, composer Earl Robinson. Perry has been playing for a while—he attended the Lenox School of Jazz in Massachusetts in 1959. He has recorded with legends like Dave Brubeck and Archie Shepp, and he’s been releasing records regularly since his album Funk Dumpling in 1962.