After decades scoring TV and film, Richard Tuttobene wanted more. He wanted to be himself. His craftsmanship and drive had kept him working since 1989. But after years of chasing an artistic satisfaction he just couldn’t find, he turned to VCFA. 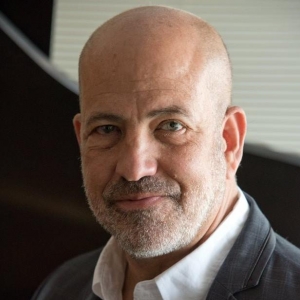 Richard has had a strong career. His music has shown up on ESPN documentaries, and in the feature film After Image, with John Mellencamp and Louise Fletcher. He was also the go-to composer for Tollin/Robbins Productions, which means that he scored a ton of classic Nickelodeon shows from the ‘90s. All That, Kenan & Kel, and The Amanda Show all featured music by Tuttobene.

Outside of film, he’s accomplished as a jazz performer, composer, and arranger and New York studio pianist, having played on many commercials and records. Hal Leonard has published several of Richard’s jazz band arrangements, orchestral arrangements, over 20 jazz piano transcription books of the recordings of Bill Evans, Bud Powell, Oscar Peterson, and Herbie Hancock, to name a few, and his composition “Tuzz’s Shadow” was a mainstay of Steely Dan tours for years.

But part of the scoring business means being asked to ape other composers, and he found himself having to do that more and more. He spent a lot of time riffing on classic themes for comedy sketches. He was taking cues from directors who wanted their score to sound like whatever composer was hip that year. Richard was paying the bills with his art, and being heard in millions of homes. But he wasn’t really doing what felt right to him.

Around this time, Richard started noticing a trend in films like There Will Be Blood and Birdman. Auteur directors were seeking composers with unique voices. They were using music to enhance the mood of a film, without hammering on the plot beats the way a traditional score does. Richard felt he had it in him to be a concert composer first, and a media scorer second. “There’s an authenticity there,” he says. “There’s a freedom for these composers.” It was exactly the approach he’d always wanted to take, and he could see that it was about to have its moment in the spotlight. But after years of being asked to mimic others, he wondered what his own, authentic voice sounded like—or whether he even had one.

Richard was looking at getting a composition teacher, when a friend pointed him toward VCFA. To this day, he remembers the conversations that he had with Sarah Madru when he called. “It was intriguing how well she understood what I was saying, and the openness and the care in the conversation about what might be good for me.” After some long conversations, he decided to give the school a shot. “It wasn’t until I got there that I really realized the magnitude of how idyllic it was. I’ve been doing this for many years; I’ve grown very careful about how my time was spent. But this sounded like it would be perfect for me.”

His very first advisor was John Fitz-Rogers, who immediately introduced him to new ways of conceiving a new piece. “He has a very methodical approach, the approach of a serious concert composer.” Fitz-Rogers advised him to plan things out non-musically first—to figure out the story you’re telling in a graph for instance. Then start writing it out, but be free about it. Don’t worry about bar lines, or tempos. If you only have pitches, or only have rhythms, don’t worry about the other piece yet.

It took five weeks for Richard to overcome being “terrified” at trying to do things this way, but when he showed Fitz-Rogers what he had, his advisor was supportive. “I’d gingerly show him something and he gave it permission. He validated that it could be something that could work, could be meaningful.” And when Richard stressed about veering from the plan, Fitz-Rogers told him “Nobody follows the plan. The plan sets the stage for the beginning of the process, but then the music tells you where it wants to go.” It changed the way Richard composes. Even when he’s facing deadlines, he finds that Fitz-Rogers’s methods of planning a piece produces results. It changed the way he saw himself, too. Even though he’s been composing professionally since 1989, he says “Working with John was the beginning of my accepting of myself as a composer,” he says, “and believing that I had what it takes.”

Richard describes the process as a journey of continual discovery—both of himself and his teachers, who always hold more depth than you really have time to uncover during a residency. “You work with them, or you listen to their lectures, and you realize the breadth of knowledge and experience with all the faculty is very wide, and enormous. So one of the things I almost regret is, I wish the program was longer, so you could work with every one of those advisors. Because there’s a real wealth there.”

But did VCFA help Richard meet the goal he set himself? He thinks so. “I came out of it with a lot more courage, and a lot more investment in the music itself, rather than sculpting the music to fit what I think will work in the business. I’ve started trying to approach things from a more organic place, and in consideration of my voice instead of what someone else would do in my situation.”

It’s started getting him noticed. “One of the people on the board of directors for the Roger Wagner chorale has heard the concert music that I did at VCFA. They’ve been around since the early 1900s. They’ve toured all over the world, and now they’re looking at becoming less traditional, and performing more cutting-edge, progressive concert works.” They asked Richard to arrange a Japanese song for their tour of Japan and Korea. “I’ve been trying to maintain the integrity and character of it, but doing it through my own voice. Which is more of a challenge, but from what they’ve heard so far, it’s what they want. They want my voice.”

He’s also noticing strong reactions from his friends in the television world, as he sends them cues that he describes as a departure from what he was doing before VCFA. “I’m getting very good reactions, so relying on my own creativity is definitely starting to attract some attention.”

It may be paying dividends, but Richard isn’t slowing down any time soon. “Once you fall in love with your work, you’re kinda screwed. If you start thinking, ‘Oh, this is a beautiful, wonderful thing,’ you stop questioning. And it can lead to complacency. You say ‘I know how to hit this scene; I’ll just hit it,’ instead of asking how it can work better.” His work ethic brought him to and through VCFA, and it won’t fail him now.

Want to join the discussion?
Feel free to contribute!