Kyle Pederson ’17 has been awarded the 2018-19 American Prize in Composition for the choral octavos professional division with his pieces “Can We Sing the Darkness to Light?,” “Psallite,” “In the Beginning,” “Stars,” and “A Mighty Fortress Is our God.”

All five of Kyle’s winning pieces were influenced in some important way by VCFA. One was born out of an assignment and a challenge by faculty advisor John Fitz Rogers; one was workshopped in the on-campus Choral Workshop; three were critiqued in masterclasses that take place during residency; and one formed the basis of several discussions with faculty advisor Jonathan Bailey Holland. In addition to one other centerpiece work with John Fitz Rogers, these five compositions were Kyle’s first pieces to be accepted for publication by a major publisher.

“The whole journey of these pieces, and my time/experience at VCFA in general, is a perfect example of how VCFA can prepare, develop, improve, and help launch a career. All this and I’m not even two full years removed from graduation!”

Below, Kyle reflects on each of his compositions and the ways they were developed, revised, and improved with feedback from both students and faculty members in the MFA in Music Composition:

Can We Sing the Darkness to Light

One of John Fitz Rogers‘ initial challenges to me after hearing some of my work was to be more intentional in getting the music out of root position. This whole piece began as a noodle out of root position, and throughout this piece I looked for ways to keep either the vocal parts or piano accompaniment in some sort of inversion. This allowed a return to root position to feel that much more impactful.

John suggested I look for a way to get the middle section into a different key, so that a return to the original key at the climax of the piece would be more dramatic. This modulation into the middle section proved additionally helpful in setting the melody more comfortably in the tenor range.

John also suggested I strip back some of the piano accompaniment in sections, wanting to be sure it didn’t become “the feature” and overshadow the singing and text. My tendency (in general) is to write an overly involved piano accompaniment, so this continual “push back” from John and others throughout my time at VCFA has been particularly helpful.

John and I talked a lot about the final couple of measures. Does it make sense to end it in tonic? What sort of “resolution” is needed? Or not needed? Are you asking a question, or making a statement? This conversation was helpful as I navigated how to close the piece.

Both of these pieces were played and critiqued in masterclass and formed the basis of several discussions with Jonathan Bailey Holland. The comment that most stuck with me from Jonathan was a metaphor of color. He asked me what color I thought was evoked throughout the piece Stars….is it a purple piece? Light blue? Gray? And then he asked whether I wanted there to be only one color throughout, or whether the piece would be stronger by adding or mixing in another color. In the end, I decided to keep the color consistent, wanting the “purple” nature of the piece to wash over the listener and establish a consistent tone/color from start to finish. I think that helps strengthen this particular piece. However, I continue to think of that feedback from Jonathan in other pieces I write–and there have been several occasions when I realize that bringing in some other colors (or switching colors altogether) is exactly what that particular piece needs at that time to keep things fresh and interesting.

A Mighty Fortress is Our God

This piece was workshopped in the Choral Workshop. I collaborated with fellow VCFA-er Christian Dancy to write the electric guitar part. In workshop, the piece was very much in early draft form, and I was able to get a sense of how some of the tensions throughout would sound and how “sight readable” the piece might be.

The most helpful feedback in this process was from the students themselves, who suggested things like: “You clearly wanted to keep building energy, but as a tenor that part was simply too low to generate much energy or volume.” As a result of that particular comment, I re-wrote those measures so that they sat more comfortably in the tenor wheelhouse.

Another person said, “You have this really nice tension (interval of a 2nd) at the ends of phrases…but I think it happens a couple times too often. I think it would stay fresher if you only introduced that tension a few times throughout the piece for maximum impact.” It was a brilliant suggestion, and following that insight resulted in a more interesting, more impactful piece.

This piece was also critiqued in a masterclass. One of the suggestions from Jonathan Bailey Holland and Mike Early was to make the clarinet more central to the piece; in the masterclass draft the clarinet was mostly “in the gaps”…and they suggested integrating it more fully into the piece so it didn’t read as an “afterthought.” In the final version, I did exactly that–and I think the piece is much stronger with a more cohesive and integral clarinet part. In some respects, I think, the clarinet “makes” the piece. 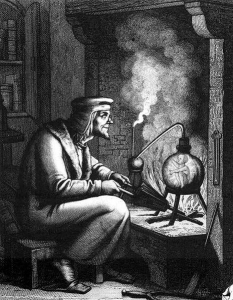 Finally, John Fitz Rogers used to talk about a homunculus (a term I had never heard before but now think about constantly) sitting on his shoulder as he composes and asking certain questions of the music. I think about this image often (not in a horror-movie sort of way)–a little homunculus that combines the vast and varied wisdom and perspective of each of the VCFA faculty sitting on my shoulder and asking questions and providing insight as I compose at the piano. What a gift that has been! 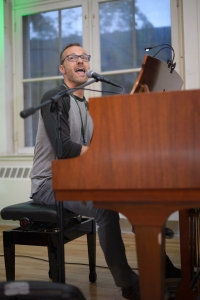 Kyle Pederson is equally at home as a pianist, educator, lyricist, and composer.

His first album, Renewal, a collection of acoustic arrangements of traditional hymns arranged for piano, violin, cello, guitar, oboe and percussion, was chosen as one of the top albums of the year by Mainly Piano in 2010.  12.25, an album of piano solo arrangements of Christmas carols/hymns, was released in 2012 and listed as high as #4 in ZMR national radio airplay monthly charts.  Tracks from both projects continue to have life on radio and internet stations worldwide, and both albums are available for download on iTunes.

Pederson earned his MFA in music composition from Vermont College of Fine Arts, an MA in Education from University of St Thomas (MN), and his BA from Augustana University (SD).  In additional to a variety of freelance projects, Kyle works part time in the music ministry at Prince of Peace Lutheran Church in Burnsville, MN, where he composes and arranges music for a variety of services. Most of Kyle’s works are self-published, with select pieces published by Walton, Santa Barbara, Carl Fischer, Galaxy, and MusicSpoke.

You can hear compositions from Kyle’s winning portfolio on Soundcloud and learn more about Kyle and his work at kylepederson.com.

The American Prize is a series of new, non-profit national competitions in the performing arts providing cash awards, professional adjudication and regional, national and international recognition for the best compositions and performances by ensembles and individuals each year in the United States at the professional, college/university, church, community and secondary school levels.

August 2017 graduate Kyle Pederson has found success with his recent piece “Can We Sing the Darkness to Light”. The piece was recently performed by the prestigious St. Olaf Chapel Choir. St. Olaf is a premiere liberal arts college, particularly noted for their music program. The Chapel Choir is part of a long, grand tradition of choral music at St. Olaf’s, and performs for worship services, the St. Olaf Christmas Festival, and more. Their work has been broadcast nationally in cinemas, TV, and radio. You can watch the performance below:

In addition to the performance Walton Music has picked up the piece for publication. Walton Music was founded by Norman Luboff to publish his own works back in 1950. In publishing with them, Kyle joins a pantheon of composers that includes the likes of Ola Gjeilo and Eric Whitacre.

Music represents a second life for Pederson. He began working as a teacher, before founding a company called Learner’s Edge, dedicated to helping teachers improve their craft. With Learner’s Edge a success, he transitioned away from managing the company and into full-time composition. He has already developed a reputation for his gorgeous harmonies and canny marriage of music to text. This publication is sure to be just the first of many. You can hear more of his work here.bridge media | Nike Dunk – Collection – Sb-roscoff